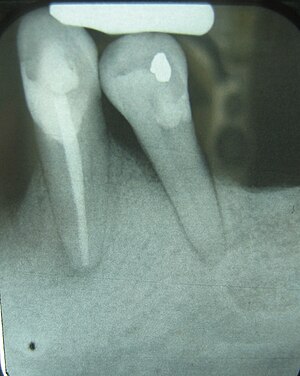 This X-ray film displays two lone-standing teeth, #21 and #22, as the remnants of a once full complement of 16 lower teeth. This case of partial edentulism is the result of periodontal disease, as is suggested by the substantial bone loss around the two remaining teeth.

Edentulism is the condition of being toothless to at least some degree; in organisms (such as humans) that naturally have dentition, it is the result of tooth loss. Loss of some teeth results in partial edentulism, whereas loss of all teeth results in complete edentulism. Persons who have lost teeth are (either partially or completely) edentulous (edentate), whereas those who have not lost teeth can be called dentate by comparison. For example, a scientific study may include a partially edentulous group and a healthy dentate control group.

Organisms that never possessed teeth can also be described as edentulous, such as members of the former zoological classification order of Edentata, which included anteaters and sloths, all of which possess no anterior teeth and either no or poorly developed posterior teeth.

In naturally dentate species, edentulism is more than just the simple presence or absence of teeth; it is biochemically complex, because the teeth, jaws, and oral mucosa are not static objects; they are dynamic (changing over time). Processes such as bone remodeling (loss and gain of bone tissue) in the jaws and inflammation of soft tissue in response to the oral microbiota are clinically important for edentulous people. For example, bone resorption in the jaw is frequently how the teeth were able to detach in the first place; the jaw in an edentulous area undergoes further resorption even after the teeth are gone; and insertion of dental implants can elicit new bone formation, leading to osseointegration. Meanwhile, bacteria and yeasts of the oral cavity and the immune system of their host create an immensely complicated and constantly changing interplay that presents clinically as gingivitis, caries, stomatitis, and other periodontal pathology.

For people, the relevance and functionality of teeth can be easily taken for granted, but a closer examination of their considerable significance will demonstrate how they are actually very important. Among other things, teeth serve to:

When an individual's mouth is at rest, the teeth in the opposing jaws are nearly touching; there is what is referred to as a "freeway space" of roughly 2–3 mm. However, this distance is partially maintained as a result of the teeth limiting any further closure past the point of maximum intercuspation. When there are no teeth present in the mouth, the natural vertical dimension of occlusion is lost and the mouth has a tendency to overclose. This causes the cheeks to exhibit a "sunken-in" appearance and wrinkle lines to form at the commisures. Additionally, the anterior teeth, when present, serve to properly support the lips and provide for certain aesthetic features, such as an acute nasiolabial angle. Loss of muscle tone and skin elasticity due to old age, when most individuals begin to experience edentulism, tend to further exacerbate this condition.

The tongue, which consists of a very dynamic group of muscles, tends to fill the space it is allowed, and in the absence of teeth, will broaden out.[1] This makes it initially difficult to fabricate both complete dentures and removable partial dentures for patients exhibiting complete and partial edentulism, respectively; however, once the space is "taken back" by the prosthetic teeth, the tongue will return to a narrower body.

As stated, the position of maximal closure in the presence of teeth is referred to as maximum intercuspation, and the vertical jaw relationship in this position is referred to as the vertical dimension of occlusion. With the loss of teeth, there is a decrease in this vertical dimension, as the mouth is allowed to overclose when there are no teeth present to block further upward movement of the mandible towards the maxilla. This may contribute, as explained above, to a sunken-in appearance of the cheeks, because there is now "too much" cheek than is needed to extend from the maxilla to the mandible when in an overclosed position. If this situation is left untreated for a many years, the muscles and tendons of the mandible and the TMJ may manifest with altered tone and elasticity.

The teeth play a major role in speech. Some letter sounds require the lips and/or tongue to make contact with teeth for proper pronunciation of the sound, and lack of teeth will obviously affect the way in which an edentulous individual can pronounce these sounds.

The alveolar ridges are columns of bone that surround and anchor the teeth and run the entire length, mesiodistally, of both the maxillary and mandibular dental arches. The alveolar bone is unique in that it exists for the sake of the teeth that it retains; when the teeth are absent, the bone slowly resorbs. The maxilla resorbs in a superioposterior direction, and the mandible resorbs in an inferioanterior direction, thus eventually converting an individual's occlusal scheme from a Class I to a Class III. Loss of teeth alters the form of the alveolar bone in 91% of cases.[2]

In addition to this resorption of bone in the vertical and anterioposterior dimensions, the alveolus also resorbs faciolingually, thus diminishing the width of the ridge. What initially began as a sort of tall, broad, bell curve-shaped ridge (in the faciolingual dimension) eventually becomes a short, narrow, stumpy sort of what doesn't even appear to be a ridge. Resorption is exacerbated by pressure on the bone; thus, long-term complete denture wearers will experience more drastic reductions to their ridges that non-denture wearers. Those individuals who do wear dentures can decrease the amount of bone loss by retaining some tooth roots in the form of overdenture abutments or have implants placed. Note that the depiction above shows a very excessive change and that this many take many years of denture wear to achieve.

Ridge resorption may also alter the form of the ridges to less predictable shapes, such as bulbous ridges with undercuts or even sharp, thin, knife-edged ridges, depending of which of many possible factors influenced the resorption.

Bone loss with missing teeth, partials and complete dentures is progressive. According to Wolff's law, bone is stimulated, strengthened and continually renewed directly by a tooth or an implant. Teeth and implants provide this direct stimulation which develops stronger bone around them.

A 1970 research study of 1012 patients by Jozewicz showed denture wearers had a significantly higher rate of bone loss.[بحاجة لمصدر] Tallgren’s 25-year study in 1972 also showed denture wearers have continued bone loss over the years.[بحاجة لمصدر] The biting force on the gum tissue irritates the bone and it melts away with a decrease in volume and density. Carlsson’s 1967 study showed a dramatic bone loss during the first year after a tooth extraction which continues over the years, even without a denture or partial on it.[بحاجة لمصدر]

The longer people are missing teeth, wear dentures or partials, the less bone they have in their jaws. This may result in decreased ability to chew food well, a decreased quality of life, social insecurity and decreasing esthetics because of a collapsing of the lower third of their face.

The bone loss also results in a significant decrease in chewing force, prompting many denture and partial wearers to avoid certain kinds of food. Food collecting under the appliance takes their enjoyment out of eating so they make their grocery and restaurant choices by what they can eat. There are several reports that correlate the quality and length of peoples lives with their ability to chew.[بحاجة لمصدر]

Dental implant studies from 1977 by Branemark and countless others show dental implants stop this progressive loss and stabilize the bone over the long term.[بحاجة لمصدر] Implanted teeth provide a stable, effective tooth replacement that feels natural. They also provide an improved ability to chew comfortably and for those missing many teeth an improved sense of well being. Dental implants have become the standard for replacing missing teeth in dentistry.

Physiologically, teeth provide for greater chewing ability. They allow us to masticate food thoroughly, increasing the surface area necessary to allow for the enzymes present in the saliva, as well as in the stomach and intestines, to digest our food. Chewing also allows food to be prepared into small boli that are more readily swallowed than haphazard chunks of considerable size. For those who are even partially endentulous, it may become extremely difficult to chew food efficiently enough to swallow comfortably, although this is entirely dependent upon which teeth are lost. When an individual loses enough posterior teeth to make it difficult to chew, he or she may need to cut their food into very small pieces and learn how to make use of their anterior teeth to chew. If enough posterior teeth are missing, this will not only affect their chewing abilities, but also their occlusion; posterior teeth, in a mutually protected occlusion, help to protect the anterior teeth and the vertical dimension of occlusion and, when missing, the anterior teeth begin to bear a greater amount of force for which they are structurally prepared. Thus, loss of posterior teeth will cause the anterior teeth to splay. This can be prevented by obtaining dental prostheses, such as removable partial dentures, bridges or implant-supported crowns. In addition to reestablishing a protected occlusion, these prostheses can greatly improve one's chewing abilities.

As a consequence of a lack of certain nutrition due to altered eating habits, various health problems can occur, from the mild to the extreme. Lack of certain vitamins (A, E and C) and low levels of riboflavin and thiamin can produce a variety of conditions, ranging from constipation, weight loss, arthritis and rheumatism. There are more serious conditions such as heart disease and Parkinson's disease and even to the extreme, certain types of Cancer. Treatments include changing approaches to eating such as cutting food in advance to make eating easier and less likely to avoid as well as consumer health products such as multivitamins and multi-minerals specifically designed to support the nutritional issues experienced by denture wearers.قالب:Cn

Numerous studies linking edentulism with instances of disease and medical conditions have been reported. In a cross-sectional study, Hamasha and others found significant differences between edentulous and dentate individuals with respect to rates of atherosclerotic vascular disease, heart failure, ischemic heart disease and joint disease.[3]

The etiology, or cause of edentulism, can be multifaceted. While the extraction of non-restorable or non-strategic teeth by a dentist does contribute to edentulism, the predominant cause of tooth loss in developed countries is periodontal disease. While the teeth may remain completely decay-free, the bone surrounding and providing support to the teeth may reabsorb and disappear, giving rise to tooth mobility and eventual tooth loss. In the radiograph at the beginning of the article, tooth #21 (the lower left first premolar, to the right of #22, the lower left canine) exhibits 50% bone loss, presenting with a distal horizontal defect and a mesial vertical defect. Tooth #22 exhibits roughly 30% bone loss.

The Kennedy classification quantifies partial edentulism. An outline is covered at the removable partial denture article.

Edentulism occurs more often in people from the lower end of the socioeconomic scale.[6]

It is estimated that tooth loss results in worldwide productivity losses in the size of about US$63 billion yearly.[7]