A topical medication is a medication that is applied to body surfaces such as the skin or mucous membranes to treat ailments via a large range of classes including but not limited to creams, foams, gels, lotions and ointments.[1]

Topical medications differ from many other types of drugs because mishandling them can lead to certain complications in a patient or administrator of the drug.[2]

A topical effect, in the pharmacodynamic sense, may refer to a local, rather than systemic, target for a medication. However, many topically administered drugs have systemic effects.

Some hydrophobic chemicals, such as steroid hormones, can be absorbed into the body after being applied to the skin in the form of a cream, gel or lotion. Transdermal patches have become a popular means of administering some drugs for birth control, hormone replacement therapy, and prevention of motion sickness. One example of an antibiotic that may be applied topically is chloramphenicol.

The word topical is derived from the Ancient Greek topos (plural: topoi), meaning "place" or "location".

A medication's potency often is changed with its base. For example, some topical steroids will be classified one or two strengths higher when moving from cream to ointment. As a rule of thumb, an ointment base is more occlusive and will drive the medication into the skin more rapidly than a solution or cream base.[3]

The manufacturer of each topical products has total control over the content of the base of a medication. Although containing the same active ingredients, one manufacturer's cream might be more acidic than the next, which could cause skin irritation or change its absorption rate. For example, a vaginal formulation of miconazole antifungal cream might irritate the skin less than an athlete foot formulation of miconazole cream. These variations can, on occasion, result in different clinical outcomes, even though the active ingredient is the same. No comparative potency labeling exists to ensure equal efficacy between generic and brand name topical steroids (percentage of oil vs water dramatically affect the potency of topical steroid). Studies have confirmed that the potency of some topical steroid products may differ according to manufacturer or brand. An example of this is the case of brand name Valisone cream and Kenalog cream in clinical studies have demonstrated significantly better vasoconstrictions than some forms of this drug produced by generic drug manufacturers.[3] However, in a simple base like an ointment, much less variation between manufacturers is common.

In dermatology, the base of a topical medication is often as important as the medication itself. It is extremely important to receive a medication in the correct base, before applying to the skin. A pharmacist should not substitute an ointment for a cream, or vice-versa, as the potency of the medication can change. Some physicians use a thick ointment to replace the waterproof barrier of the inflamed skin in the treatment of eczema, and a cream might not accomplish the same clinical intention.

There are many general classes, with no clear dividing line between similar formulations. As a result, what the manufacturer's marketing department chooses to list on the label of a topical medication might be completely different from what the form would normally be called. For example, Eucerin "cream" is more appropriately described as an ointment than as a cream.

[4]Topical solutions are of low viscosity and often use water or alcohol in the base. The solution can cause drying of the skin if alcohol is used in the base. These are usually a powder dissolved in water, alcohol, and sometimes oil. Alcohol in topical steroids can frequently cause drying if it is used as a base ingredient. There is significant variability between generic brands and name brands. There is a risk of irritation, depending on the preservative(s) and fragrances used in the base. Some examples of topical solutions are given below:

1:Aluminium Acetate topical' solution: This is a colorless, with a faint acetous odour and sweetish taste. It is applied topically as an astringent after dilution with 10-40 parts of water. This is used in many types of dermatologic lotions, creams, and pastes. Commercial premeasured and packed tablets and powders are available for this preparation.

2- Povidone Iodine Topical solution: This is a chemical complex of iodine with polyvinylpyrrolidone, the agent being a polymer having an average molecular weight of 40,000. The povidone iodine contains 10% Available iodine, slowly released when applied to skin. This preparation is employed topically as a surgical scrub and non irritating antiseptic solution, with its effectiveness being directly attributed to the presence and release of iodine from the complex. Commercial Product: BETADINE SOLUTION

Lotions are similar to solutions but are thicker and tend to be more emollient in nature than solution. They are usually an oil mixed with water, and more often than not have less alcohol than solutions. Lotions can be drying if they contain a high amount of alcohol. There is a significant variability in the ingredients of base of generic lotions when compared to brand name lotions.

A mixture that separates into two or three parts with time. Frequently an oil mixed with a water-based solution. Needs to be shaken into suspension before use. "Shake well before use".

A cream is an emulsion of oil and water in approximately equal proportions. It penetrates the stratum corneum outer layer of skin well. Cream is thicker than lotion, and maintains its shape when removed from its container. It tends to be moderate in moisturizing tendency. For topical steroid products, oil-in-water emulsions are common. Creams have a significant risk of causing immunological sensitization due to preservatives. It has a high rate of acceptance by patients. There is a great variation in ingredients, composition, pH, and tolerance among generic brands.[5] 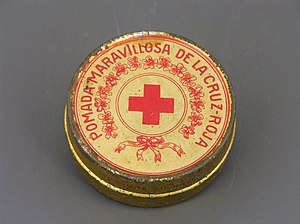 Metal case for Cruz Roja ointment from Mexico (beginning of 20th century) from the permanent collection of the Museo del Objeto del Objeto.

An ointment is a homogeneous, viscous, semi-solid preparation, most commonly a greasy, thick oil (oil 80% - water 20%) with a high viscosity, that is intended for external application to the skin or mucous membranes. They are used as emollients or for the application of active ingredients to the skin for protective, therapeutic, or prophylactic purposes and where a degree of occlusion is desired.

Ointments are used topically on a variety of body surfaces. These include the skin and the mucous membranes of the eye (an eye ointment), vagina, anus, and nose. An ointment may or may not be medicated.

Ointments are usually very moisturizing, and good for dry skin. They have a low risk of sensitization due to having few ingredients beyond the base oil or fat, and low irritation risk. There is typically little variability between brands of generics and namebrand drugs. They are often disliked by patients due to greasiness.[5]

The medicaments are dispersed in the base, and later they get divided after the drug penetration into the living cells of skin.

Ointments are formulated using hydrophobic, hydrophilic, or water-emulsifying bases to provide preparations that are immiscible, miscible, or emulsifiable with skin secretions. They can also be derived from hydrocarbon (fatty), absorption, water-removable, or water-soluble bases.

Properties which affect choice of an ointment base are:

Methods of preparation of ointments

Trituration: In this finely subdivided insoluble medicaments are evenly distributed by grinding with a small amount of the base followed by dilution with gradually increasing amounts of the base.

Fusion: In this method the ingredients are melted together in descending order of their melting points and stirred to ensure homogeneity.

Gels are thicker than a solution. Gels are often a semisolid emulsion in an alcohol base. Some will melt at body temperature. Gel tends to be cellulose cut with alcohol or acetone. Gels tend to be drying. Gels tend to have greatly variable ingredients between generic brands and trade names. Gels carry a significant risk of inducing hypersensitivity due to fragrances and preservatives. Gel is useful for the scalp and body folds. In applying gel one should avoid fissures and erosions due to the drying and stinging effect of the alcohol base. Gel enjoys a high rate of acceptance due to its cosmetic elegance.[5]

Foam can be seen with topical steroid marketed for the scalp.

Transdermal patches can be a very precise time released method of delivering a drug. Cutting a patch in half might affect the dose delivered. The release of the active component from a transdermal delivery system (patch) may be controlled by diffusion through the adhesive which covers the whole patch, by diffusion through a membrane which may only have adhesive on the patch rim or drug release may be controlled by release from a polymer matrix. Cutting a patch might cause rapid dehydration of the base of the medicine and affect the rate of diffusion.

Powder[6] is either the pure drug by itself (talcum powder), or is made of the drug mixed in a carrier such as corn starch or corn cob powder (Zeosorb AF - miconazole powder). Can be used as an inhaled topical (cocaine powder used in nasal surgery).

Medication may be placed in a solid form. Examples are deodorant, antiperspirants, astringents, and hemostatic agents. Some solids melt when they reach body temperature (e.g. rectal suppositories).

Certain contraceptive methods rely on sponge as a carrier of a liquid medicine. Lemon juice embedded in a sponge has been used as a primitive contraception in some cultures.

Cordran tape is an example of a topical steroid applied under occlusion by tape. This greatly increases the potency and absorption of the topical steroid and is used to treat inflammatory skin diseases.

Some medications are applied as an ointment or gel, and reach the mucous membrane via vaporization. Examples are nasal topical decongestants and smelling salt.

Paste combines three agents - oil, water, and powder. It is an ointment in which a powder is suspended.

A tincture is a skin preparation that has a high percentage of alcohol. It would normally be used as a drug vehicle if drying of the area is desired.